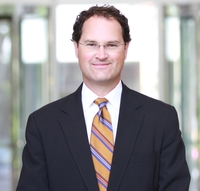 Patrick Burns focuses his practice on ADR and civil litigation. He is licensed to practice law in Minnesota, Wisconsin, North Dakota and South Dakota. Patrick was recognized as a “2015 Minnesota Lawyer of the Year” by Minnesota Lawyer magazine. Since then, he has been included in the publication The Best Lawyers in America for his work in dispute resolution.

He also has been recognized as a Super Lawyer for ADR and litigation every year since 2014 by The Twin Cities Business Journal.  Minnesota Lawyer named Patrick one of 20 “Up and Coming Attorneys” in the state in 2007, and in 2010 he was named a “Rising Star” in ADR and litigation by Minnesota Law & Politics. Patrick is an active mediator and arbitrator who serves on the American Arbitration Association’s (AAA) national and international panels of mediators and arbitrators. Patrick also volunteers as a mediator through the Minneapolis Department of Civil Rights and Hennepin County District Court. He was formerly vice president of the Minneapolis office of the American Arbitration Association and served on active duty as an officer and trial lawyer in the Army JAG Corps. Patrick earned B.S., M.P.A. and J.D. degrees from the University of South Dakota, where he was formerly an adjunct professor of law. Patrick served for two years as the chair of the Minnesota State Bar Association’s 400 member Alternative Dispute Resolution Section. He earned an LL.M in Dispute Resolution from the Pepperdine School of Law Straus Institute for Dispute Resolution in Malibu, California.

Active in establishing pro bono mediation program in Hennepin County. Appointed as mediator by Hennepin County District Court in numerous pro bono matters; named a 2015 “Attorney of the Year” by Minnesota Lawyer magazine for pro bono efforts on behalf of a Vietnam War combat veteran in appeals to the Veteran’s Administration and Army Board for Correction of Military Records; mediator for the Minneapolis Department of Civil Rights; represents Minnesota GreenStar, the leading third-party certifier of green building, remodeling and design in the State of Minnesota.

Patrick Burns focuses his practice on ADR and civil litigation. He is licensed to practice law in Minnesota, North Dakota, Wisconsin and South Dakota. 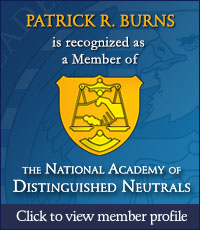